Deputy Labor leader Angela Rayner has revealed what was written in the memo circulated among British MPs during the House of Commons sitting on the day Queen Elizabeth died.

Keir Starmer was positioning himself on the energy and cost-of-living crisis when Nadeem Zahawi, the under-secretary for palace relations, whispered in the Prime Minister’s ear before handing her a folded note on September 8. The note therefore reached the hands of Mrs. Rayner, while the leader of the Labor Party, Keir Starmer, was speaking on the floor of the Parliament.

Rainer revealed the dilemma she faced as she considered how to interrupt the Labor leader while it was all being filmed. In fact, it can be seen in the video that he is agitated while reading the note and consulting colleagues about what he should do.

As he told the ‘News Agents’ podcast with Emily Maitlis and Jon Sopel on Wednesday, the note was written in “plain English” and read: “The Queen is unwell and Kiir needs to leave the room as soon as possible to be informed”.

Rainer told the podcast: “I read between the lines, because you don’t get a memo saying the Queen is unwell if she has a bit of a cough or a cold,” adding: “I was trying to get the memo to Starmer without being very dramatic, but not knowing exactly what was going on… I had to get him out of the room.”

“I kept the note and I was trying to think of how to tell Keir without completely ruining what he’s trying to say, because if someone tries to give you information when you’re in the middle of a speech it’s a distraction, so I waited for the opportunity to I do,” he added.

She then looked to her right and caught the eye of the Speaker of the House of Commons, Sir Lindsay Hoyle, who signaled that she should inform Starmer. “It signals to me that this is something really extraordinary. Therefore I knew it was a really important moment” he stressed, noting that he was concerned that an announcement might suddenly be made about the Queen’s death without the leader of her party having been informed. “If Kiir had been speaking when the news broke, then I wouldn’t have protected him,” he noted.

Delirium out of bounds by Erdogan: “We will never forget the massacre in Tripoli”

Kavala: The parents and wife of the 25-year-old who murdered the 52-year-old are in custody The gold of the lagoon, the gourmet delicacy! Patras: With a tribute to the rebetiko of the Occupation, the events for the liberation of the city continue today The price of tsipouro is on fire 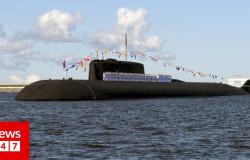