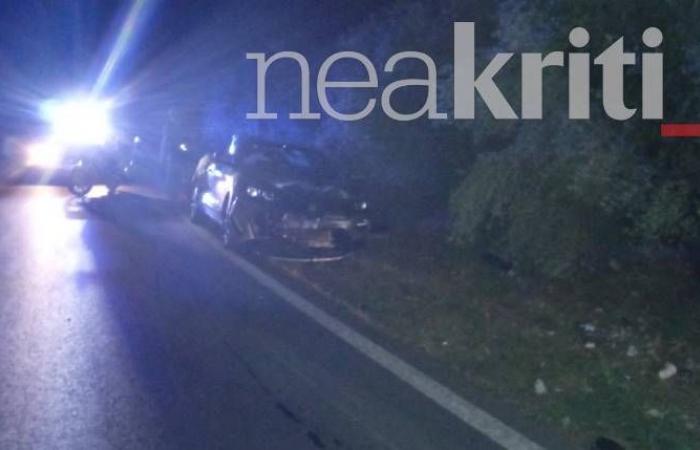 He is being held at the Rethymno police headquarters until he is taken to the 40-year-old tourist from Cyprus is under investigation, who was allegedly driving drunk, resulting in an injection with his car, the motorcycle of the 34-year-old from Perama, with the result that the unfortunate man to met a tragic death, her evening Wednesday, August 31.

The 40-year-old tourist from Cyprus who was detained from the first moment and who while driving his ICHE car drunk, punctured the motorcycle of the unfortunate 34-year-old late last Wednesday night from Perama, as a result of which the 34-year-old died during his transfer to the Rethymno hospital.

The Cypriot tourist was found to be driving under the influence of alcohol, he was arrested at the scene of the tragedy and yesterday afternoon was taken to the Prosecutor, who charged him with a felony.

He is specifically accused for dangerous drink driving causing death, while also dealing with the charge of disobedience against the Authority, which is not of a criminal naturebecause he allegedly refused to proceed with a blood draw.

The Cypriot tourist will remain in custody until noon next Monday, when he will be transferred to the investigator in order to apologize, while the outcome of the court proceedings will be determined by the decision taken by the Investigator and Prosecutor.

However, according to the information so far, the 40-year-old who is in Crete with his partner for a few days vacation, they were staying in Heraklion and last Wednesday they had visited Rethymno making a trip to Mylopotamos. However, after 10 p.m. and while he was driving on the provincial road Rethymno – Perama in the direction of Rethymno, he allegedly lost control of his vehicle, probably because he was drunk, as a result he entered the opposite flow of traffic and rammed the motorcycle of the unfortunate 34-year-old, who, we remind you, had already passed out by the time he was taken to the hospital.

However, according to the latest information, the tourist claimed that he got confused on the way because of the traffic system in force in Cyprus, which is contrary to the one in Greece.

Sadness for the 62-year-old bicyclist

At the same time, grief was spread in Rethymnon by the turn taken by last Wednesday’s serious traffic accident. THE unfortunate 62-year-old driver of the motorcycledespite the difficult battle he fought and the superhuman efforts of the doctors, he finally did not succeed and in the morning he died while being hospitalized in the Intensive Care Unit of the Rethymno hospital.

The unfortunate Rethymnon was seriously injured in the head last Wednesday afternoon, when the two-wheeled motorcycle he was riding was involved in a traffic accident with a passing car on the Northern Road Axis of Crete, at the height of Gerani.

From the first moment that the injured man was transferred to the nursing institution of Rethymnon, the doctors deemed it necessary to admit him to the Intensive Care Unit, in order to treat the severe brain injuries he sustained. The unequal battle he fought with death lasted a little more than 24 hours, with the result that today the news of his death plunged his family into mourning and spread sadness in the local community.

Its worth to noted that since the beginning of the year 39 people have lost their lives on the streets of Crete.

PREV Tough response from the Ministry of Foreign Affairs in Ankara: We will not follow Turkey in the outrageous descent of statements and threats
NEXT A 26-year-old woman was arrested in Thessaloniki – “Selling” love and made off with more than 300,000 euros